It's my birthday today! In the spirit of celebrating life I did my solar cooker experiment, a project that I had started a few years ago but never managed to finish. For about six hours today I logged the internal temperature of my box cooker (from 11:30am to 5:30pm) while a cup of rice was being cooked within the black pot. Go sun go! 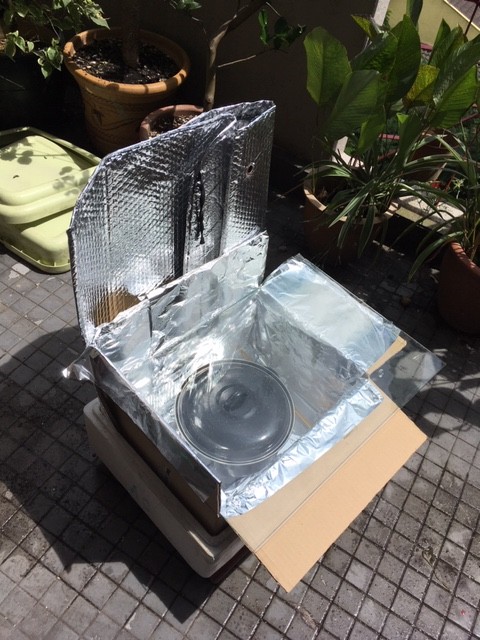 The results were a little anti-climactic - the rice was half over-cooked and half-undercooked, a feat if you think about it. At the same time I suspect that the reflected rays from the sun wilted the leaves of some of my plants. I checked on the temperature often (wearing sunglasses) and at some point I also held a fan in front of my face to protect it, since it was starting to feel a little sunburnt. However, my temperature log never went above 67 degrees Celsius.

I'm not sure if I'll make another attempt because of the collateral damage of wilted plants, but if I do, here are the things that I will do differently:

In gardening news, my seed packets arrived on Saturday. I germinated some with the paper towel method, and they're all starting to sprout as of this morning! I must say I was not expecting such speedy sprouting, and was very excited. As of now I've moved two of the sprouted tomato seeds, the Red Tumbling Toms, into yogurt containers covered with lids. I am cautiously happy. The rest of the sprouts (another few types of tomatoes, and catnip) are still in their paper towel baggies, I'll work on moving them to the containers tomorrow. Spurred by the speedy sprouting, I have now a few more paper towel baggies on the way.

For my transplanted microgreens, the kale are now growing actual leaves, as are a few enterprising rocket seedlings. The beet sprouts have long perished, and the pea sprouts are sort of hanging around, being mercilessly pruned by my cats who seem to like pea sprouts. The kangkung is doing sort of ok... but some wilted after the solar cooker experiment.

I'm considering fertilising at some point but am not sure what fertiliser to use apart from my homegrown compost.

Outside the bedroom now is a beautiful twilight of yellow ochre, light blue, and orange. It has been threatening to rain but the drops have not translated into anything substantial. The world is such a beautiful place. Just have to remember to look at it once in a while.